Learn From My Mistake

Take a look at this.


LEARN FROM MY MISTAKE

Take a look at this! Do you know what this is? 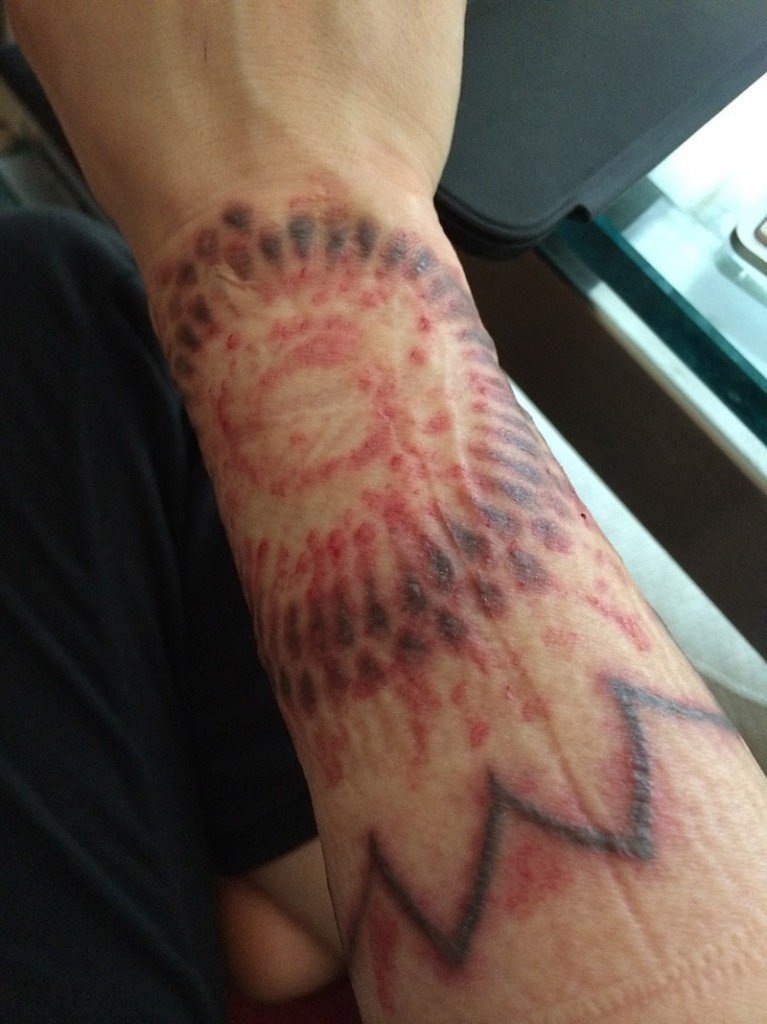 This is what my wrist looks like after reaching down into the garbage disposal. I was trying to grab an earring when a friend reached over and turned it on. KIDDING!!

This is what my wrist looks like after reaching into a fireplace. I was sitting on the couch when I noticed my earring was at the bottom of 3 burning logs. KIDDING!

Okay, okay, okay, for real, this is what my wrist looks like after going in for my tenth attempt of removing my tattoo. As you know, I broke my wrist. Did you see the video about it?

The pins that helped heal the break, left some nasty scars. So I decide to cover them with A SMALL TATTOO. I told the tattoo artist about what I wanted. He told me that he was an artist so he’d like to run some ideas by me. I said, “Okay… can you send them to me via e-mail?” He said yes, but never did. I kept e-mailing him. He finally wrote back and said, “Just come, I have some stuff.” When I got there, he just had one design. I said I don’t want it. He said “Well it’s not going to look like this.” Huh? I said, “Can you draw what it’s going to look like?” He just kept explaining it. I told him that I didn’t understand and he started to get frustrated with me. He said, “Based on what you said, you want this…. but now it sounds like you don’t want a tattoo.” I said, “No I do want a tattoo.” He said, “Look, I’ve been doing this a long time…I know what you want…have a little trust, and I promise you will be real happy with it.” Like a dummy, I went for it. This tattoo was getting bigger and bigger as he was etching it onto my skin. I protested and he said, “Look, if I don’t do the whole thing, it’s not gonna look right…trust me on the size of this.” When it was all done, I paid him and told him I loved it. I just wanted out of there.

I went home and cried. I would wake up at night and look at it like it was all just a bad dream. For the record, I have only myself to blame! I know this.

It’s been a long process getting this off. I first wanted to test a part of the tattoo instead of jumping in with both feet again. After about one year, the outer parts were gone. Now it’s probably going to take another year to get the rest of the off.

This tattoo removal is off-the-charts on any pain scale. I don’t like to swear on my new site, but this shit fucking hurts so fucking bad!!! Imagine getting a tattoo, then reaching into a garbage disposal and grinding your arm, then right after that, reaching into a fireplace for about ten minutes. That’s what tattoo laser removal on your wrist feels like!

So, if you ever break your wrist while running with your dogs, get surgery, then pins and then decide to cover the scars left behind from it all with a tattoo, you better be damn sure you know what you are getting and love it. Because my wrist has been to hell and back….and it looks like I have to book a few more trips.

Here’s the story of how my wrist broke.